‘BAHAMAS SHOWCASE’ GETS STAMP OF APPROVAL 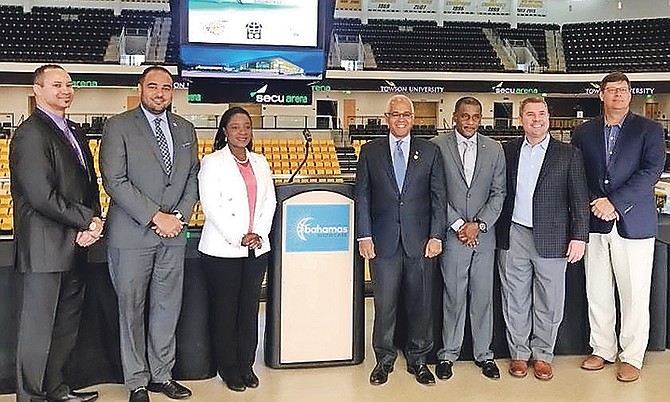 Theo Neilly, Lanisha Rolle, Dionisio D’Aguilar and Jeff Rodgers were among the dignitaries at the Towson University press conference in Baltimore, Maryland.

MINISTERS of Sports and Tourism, Lanisha Rolle and D’ionisio D’Aguilar respectively, put their stamp of approval on the return of the ‘Islands of the Bahamas Showcase’ for the third time in November by participating in a press conference for the visiting teams in Baltimore, Maryland, last Thursday.

“To have two ministers from the Government of the Bahamas to introduce the tournament is priceless,” Global president and founder Brooks Downing said. “To discuss an early season event six weeks in advance from a very key market that’s important to the Bahamas is a win-win for everybody.

“This is a great facility and we’re grateful to Towson for hosting this press conference.”

Jeff Rodgers, the local organiser, said Rolle and D’Aguilar were appreciative of the support they got from Towson University at the press conference in the SECU Arena for international dignitaries, athletic administrators and sponsors of the third annual tournament, scheduled for November 16-19 at the Kendal Isaacs Gymnasium.

“The purpose for us going there was to let the teams coming in know that the Bahamas Government is behind the event and we are going to do whatever it takes to make the event a successful one,” said Rodgers about the presence of Rolle and D’Aguilar.

Also in attendance was Theo J Neilly from the Embassy Consular of the Commonwealth of the Bahamas in Washington, D.C.

“We are really excited and we’re looking forward to having Towson participate in our event,” Rolle said. “There’s confidence in our country to be able to provide the experience that the players and coaches are looking for.

“We were looking for an experience that not only the players benefit from but the locals as well with being able to interact with the student-athletes. I am looking for the tournament to be a tremendous experience and a memorable time.”

The Towson University Tigers are one of eight programmes along with Montana, Incarnate Word, North Dakota State, Miami (Ohio), Florida Atlantic, Georgia Southern and Pepperdine that will compete in the showcase.

“It’s fun to showcase our facility even though we’re not playing the game here,” Towson athletic director Tim Leonard said. “Whenever you have ministers from another country visit your campus and see what we have to offer is always great. I am really pumped up and excited for our student-athletes to travel to the Bahamas.”

This will be Towson’s third international trip over the last two seasons. The Tigers travelled to Canada last August for a summer exhibition tour. Towson stayed in Montreal and visited Ottawa and Quebec City. Towson also went to Belfast, North Ireland last December where it won the Basketball Hall of Fame Belfast Classic.

Towson will open the three-day tournament against Pepperdine at 8pm on Friday, November 16 at the Kendal Isaacs Gymnasium. This will be the second meeting in programme history against the Waves, who are members of the West Coast Conference. The Tigers and Waves last played in the 1990-91 season.

After finishing with 18 victories for the fifth time in the last six years, Towson returns seniors Alex Thomas and Jordan McNeil, along with junior Dennis Tunstall from last season’s squad that received votes in the Associated Press Top 25 poll during the month of December.

“It speaks volumes to our programme and our administration to let us play in a first-class event in an unbelievable location,” Towson head coach Pat Skerry said. “To have prime ministers and major representatives from the Bahamas here is pretty cool. We’re appreciative of the time they took out of their schedules to be here today and that says a lot about the importance of this tournament.”

Rodgers, the senior manager for sports tourism in the Ministry of Tourism and Aviation, said it’s their goal to make the tournament the most sought after in the Bahamas, although that distinction belongs to the Battle 4 Atlantis that is staged annually during the Thanksgiving weekend on Paradise Island.

“The difference in this tournament is that while the teams and their guests stay at Baha Mar, they get to travel around the island and play in the Kendal Isaacs Gymnasium,” Rodgers said. “They get to go into the community and interact with the Bahamian people.

“We have set up for them at Fish Fry and one of the local restaurant owners, Vincent ‘Curly’ McDonald, provides lunch for all of the workers at the gymnasium. We want to make sure that they have a true Bahamian experience when they come here.”

Rodgers said after hosting the first two tournaments, they are looking forward to raising the bar this year and they have already gotten off to a great start by having the two ministers participate in the press conference in Baltimore.