When Salwa Eid Naser overturned expectations of the women’s 400m final at the IAAF World Athletics Championships Doha 2019, she evoked the memories of races past.

Most thought that Shaunae Miller-Uibo – the Olympic champion, the fastest woman in the world this year, the woman who could have won the 200m-400m double here if only the timetable allowed – would turn back any challenge the young Bahraini athlete could throw at her.

Most of us, then, were wrong.

Starting two lanes to Miller-Uibo’s inside, Naser had made up most of the stagger by the end of the back straight. She then powered clear on the bend and defied the favourite’s efforts to run her down.

Naser ran 48.14, almost a full second better than her previous best and a time bettered only by world record-holder Marita Koch (47.60 at the IAAF World Cup in Canberra in 1985) and the woman who preceded Koch as world record-holder, Jarmila Kratochvilova (47.99 at the first IAAF World Championships in Helsinki in 1983).

Miller-Uibo was almost as brilliant in defeat. Her 48.37 makes her the sixth-fastest ever, a personal best by 0.60. She ran fast, Naser simply ran faster.

Watching Miller-Uibo and Naser in their heats and semi-finals here, many fans were struck by the physical reminders of two other great rivals in the 400m – Marie-Jose Perec and Cathy Freeman. 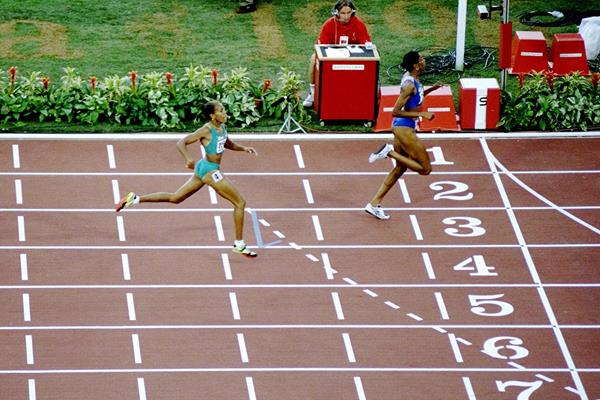 Perec and Miller-Uibo are both prototypes of the tall, languid 400m runner. Freeman and Naser are smaller and more powerful, though each has a surprisingly long stride length for their height. Australian biomechanical research before the Sydney 2000 Olympics revealed Freeman took fewer steps running a 400m than Michael Johnson.

Freeman never got to beat Perec at an Olympics or World Championships, but she came very close in Atlanta. The seed was sown at the World championships in Gothenburg the previous year. Freeman was drawn inside Perec then, just as Naser was here against Miller-Uibo. She raced out fiercely, too fiercely as it turned out.

Australian hearts were pounding faster as Freeman, who had beaten Perec in Monaco a few weeks before, caught the French woman along the back-straight. But she had gone out too fast, losing her form in the final 50 metres to drop from second to fourth.

Freeman learned the following year in Atlanta, running a much more measured race. She drew level with Perec in the final straight, but just could not find the strength to get past. Perec took the gold medal in 48.25 and was then the third (now the fourth) fastest ever, with Freeman taking silver in 48.63.

Over the next four years, Freeman won at the 1997 and 1999 World Championships as well as the Sydney Olympics. But she never got the chance to race Perec for a major title again.

There is no better example of the underdog beating the favourite, as happened here, than the result of the very first women’s Olympic 400m in Tokyo in 1964. Britain’s Ann Packer was the favourite, Cuthbert, who had won the 100m/200m double in Melbourne eight years earlier, was good, but an unknown quantity to some extent. 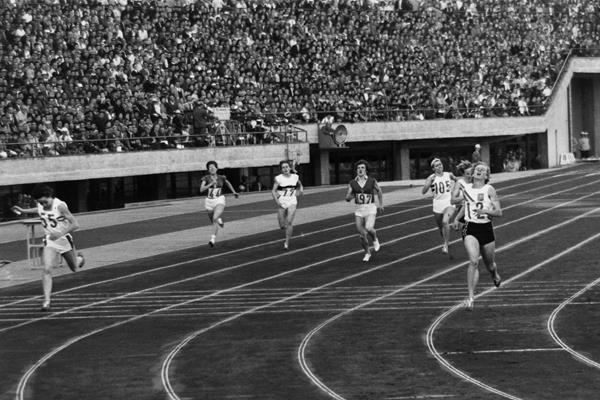 Packer looked to have the race won, but Cuthbert finished over the top of her to take the historic gold medal, making her the only woman to have won Olympic gold in all three sprint distances. Packer, devastated by the loss, turned her attention to the 800m and won that instead.

Miller-Uibo herself was in the position of underdog defeating the favourite when she won her Olympic 400m gold medal in Rio three years ago. Allyson Felix was favoured to win then, but Miller-Uibo defeated her in a somewhat bizarre manner. Having spent all her energy in chasing down her US rival, Miller-Uibo’s legs gave way at the finish and she fell on the line, her torso crossing it ahead of Felix.

Then, on a cold and wet night in London in 2017, Miller-Uibo was the ‘victim’. Seeming to have the gold medal in her keeping, she got the staggers 30 metres from the line and dropped from first to fourth, passed by Francis, Naser and Felix.

“I looked up at the screen, misplaced my foot and completely lost balance,” Miller-Uibo explained.

Finally, another example of a barely-averted upset was when Freeman, in lane one, was heading for the line to take her first World Championships victory in Athens in 1997 and appeared to forget her sometime training partner Sandie Richards who was flashing home in the outside lane.

The apparently oblivious favourite held on to the line, but it was way too close for comfort, 49.77 to 49.79.

Len Johnson for the IAAF