The Bahamas Lawn Tennis Association (BLTA) congratulates Kevin on his awesome accomplishment. Major has represented the country well on previous Davis Cup teams and was instrumental in The Bahamas’ promotion to Zone 2 in 2016.

Bahamian Justin Lunn was also in the United States Tennis Association (USTA) tournament with Kevin. He won in the round of 64 but got defeated in the round of 32. Lunn previously represented The Bahamas in Davis Cup Zone 2 against Venezuela and Bolivia in 2017.

The BLTA wishes Kevin and Justin great tennis success in the international arena. 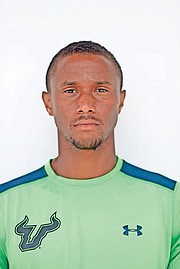 JUSTIN Roberts continues his play on the ITF Pro Circuit with the NCAA season still months away.

Roberts played himself into the main draw of the USA F28B Futures event in Waco, Texas, but lost in the opening round after three successful qualifying matches.

Just over a month ago, Roberts’ run at the USA F25 Futures event in Laguna Niguel, California, came to an end in a second-round loss in the main draw to No.5 ranked Michael Zhu of the United States, 6-1, 6-1.

He won four matches in the qualifying draw and the first round of the main draw.

Roberts graduated last May from the University of South Florida and completes his final year of college eligibility this season at Arizona State University.

He tore a ligament in his right wrist and had an eventual bone avulsion where a piece of the bone broke off on its joint. He eventually had it reattached.

“I think I handled the injury and being out for about nine months competition and seven months playing tennis very well. It was hard in the beginning but I kept up with my fitness and mental side of the game and I feel I came back better in some things than I was before, which is always a positive,” he said.

“Leaving USF to come to ASU has been a really good transition. It’s a little different being in the desert but the coach at ASU was the first coach I had at USF so I know what I’m getting there.

“The guys are great, we have a really talented team so we look forward to doing some big things this year, win the PAC 12 conference and do some damage in the NCAA tournament. Everything has been going good, I just look forward to the rest of the year.”

Welcome to My blog Sites. This is your first post. Edit or delete it, then start blogging!